The role of social identity in addiction treatment

We all have multiple identities, relating to our ethnicity, our gender, our work groups, or the social groups we belong to. However, as researchers belonging to LSBU’s Addictive and Health Behaviours are showing, our identities around being an addict, or a recovering addict, are particularly strong.

In the last few years the group’s work (assisted by a number of PhD, MSc and undergraduates) has shown consistently that these identities can predict an enormous amount of variance in a client’s treatment success. Identity seems to be particularly important when predicting how well a person does in treatment, how long they go without relapsing, or the longevity of their relapse.

Bringing together their respective expertise in social identity and dual process, Dr Dan Frings and Prof. Ian Albery have spent the last four years conducting studies and developing the cessation maintenance model, which describes the processes that underpin how identities affect treatment outcomes.

Ian describes how their complimentary expertise have been instrumental in developing the model: “What we did was take the best of Dan’s knowledge in terms of group processes, and my knowledge of how people attend to things in their environment, and dual process; implicit vs explicit processing. We put these things together and said 'Do you know what? This could actually make some sense.' The whole identity issue, the whole self-identity issue; how we use identities in groups would benefit hugely from exploring a dual process approach.”

Which is exactly what they have done. Their Social Identity Model of Cessation Maintenance (SIMCM) proposes that when people are experiencing the world from the perspective of a group membership they are affected by that group membership in two distinct ways: via one set of processes that a person is aware of (explicit processes) and via another set of processes which operate underneath the radar (implicit processes). 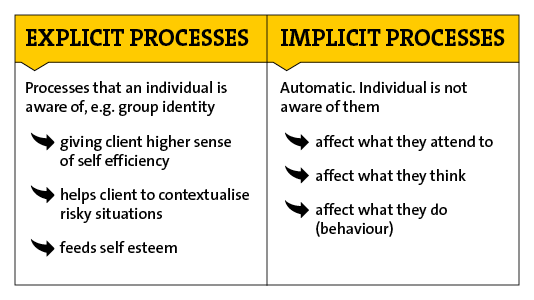 The role of implicit processes

These implicit processes predict actual behaviour. They don’t just to predict how people say they’re going to behave - they actually predict what they do in the moment, as they experience a sort of ‘identity activation’.

Ian explains further: “What we’ve found is that in a situation where a person sitting alone is asked to pour themselves an alcoholic beverage and then drink as much of that as they want, the best predictor of that in-the-moment drinking activity is not how they see themselves in terms of their explicit awareness of being a social drinker, but the implicit identity that they hold as being a social drinker.”

The implications of the model for practitioners

The researchers argue that both sets of processes need to be taken into account when treating addiction, the more you can get an individual to come out of their automatic mode of thinking and into  a more conscious reflective state, the better they should do.

The model obviously has implications for practitioners but, as Dan is careful to point out, “There’s no magic bullet.”

It’s not like you can use identity and just say, “We’ll get an identity and we’ll fix people and it will all be good,” but our findings consistently show that identity is linked to relapse … it’s important that we understand how people conceive themselves and how they should be conceiving themselves as part of the treatment process.

SIMCM is helpful in that it works well with more established models commonly used in practice, such as the Stages of Change model. As Dan explains, “When people go through certain transitions their identity needs to be in a certain way. There’s no point getting people to move from preparation to action if really their identity is still bedded down as being an addict - they’re not going to get very far.”

The group continue to explore and develop the model in applied setting with partners like Turning Point and Adfam. They also plan to undertake further research looking at how people become smokers, drinkers or e-cigarette users and how those identities are established.

Ian is excited about the future: “We’re writing theoretical bits and pieces about that at the moment, but we need to do experimental work in that area to make sure the model becomes accounts for the ways these identities change before becoming an addict, and what happens to these identities before, during and after treatment.”

If you are working in the sector and would like to help or become involved with the group, get in touch.