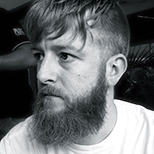 Alan Power is a Theatre Technician in the Edric Theatre. He graduated from Kingston University with a BA in Drama, followed by an MA in Filmmaking, where he worked on writing and directing as his main areas of study.

Alan has worked as a trainer in the IT Industry which, combined with his studies and practices in Drama and Film, has led him to focus on stagecraft and the use of multimedia in performance, specifically in relation to interactive and visual technologies and projection mapping.