Being bold and taking risks: LSBU alumnus and Honorary Fellow Tom Toumazis MBE reflects on his achievements and why it's important not to play it too safe

Like so many people with stellar careers, Tom Toumazis claims not to have started out with any grand plan. But spend just a little time with him and it’s clear that, while there might not be a plan per se, there is a strong set of guiding principles - and a definite appetite for risk.

“I suppose I’ve always been attracted to trouble,” he says. “I love change, and I always want to be doing something that pushes me and teaches me something new.”

By way of illustration, look no further than his most recent career move: in November 2015 he stepped down from a high profile role as European Head of Partnerships at Yahoo! to focus instead on investing in and supporting a number of start-up businesses. “The opportunity arose to have what I guess you’d call more of a portfolio career,” he says, “and I took it. Yes, it’s a risk; but it’s also really exciting.”

Currently, a typical week looks something like this: one day spent with art authentication service Tagsmart; two days with TV audience data company TVbeat; and around half a day with his newest venture, the phenomenally successful digital content provider TheLADbible. The rest of the time is taken up with charity work - as chairman and founder of the ChildLine Board, Tom has helped raise more than £9 million to date for the charity, which provides a free helpline for children in need.

Everyone with any power or influence should get involved with a non-profit. The fact is, it feels great to be able to make a difference.

Clearly, despite all his success - his CV also includes stints as managing director of Emap Advertising, Chief  Commercial Officer at production company Endemol Group and CEO of European newspaper giant Mecom - he is still just as driven as he was at the very start of his career, when he left the then South Bank Polytechnic with a HND in Business Studies.

“If I’m completely honest, I went to poly because I didn’t feel ready to start work,” he says. “But by the time I left, I was a lot more focused. I had to be. I was engaged by then (to wife Helen) and I needed to start earning. In the Cypriot community, a lot of people went into the family business - in my case, the restaurant trade. But that wasn’t for me. Back then I didn’t know there was such a thing as a career in the media, but I knew I wanted to do something in selling or on the commercial side, and that I wanted it to involve working with people.”

Faced with the prospect of finding work in a competitive market and with, by his own admission, a less than glittering academic track record, Tom came up with a creative approach: offering to work for potential employers for free for three months. “Incredibly, an ad agency took the bait,” he says. “They put me in the media department. It wasn’t where I wanted to be, but I found I was good at it. I was buying TV spots, including on London Weekend Television, and that connection got me an interview - and subsequently a job - with them. At the time, they only recruited the crème de la crème. If I’d sent in my CV I wouldn’t have got anywhere. That was really my first lesson in the importance of networking.”

From LWT, Tom went on to work for a number of other ITV companies, before moving to Eurosport as managing director - his first time in the top seat, and the start of a series of senior roles that was to culminate in his appointment at Mecom in 2011. These were turbulent times for the company, with major cost-cutting measures under way and significant parts of the business being sold off in an attempt to stabilise the company.

“It’s not easy managing decline,” says Tom. “Change is always hard. But you have to make people realise that if they carry on the way they are, they’re heading for disaster - and create a compelling vision for the future. Doing a job like that is not for the faint-hearted, but it was an incredible experience. I was waking up every day knowing I’d be learning something new, and that’s exactly what I love doing.”

Now, Tom is bringing his experience to bear on a very different type of business venture: start-ups. One, Tagsmart, is a system for authenticating works of art based on DNA technology. Another, TVbeat, aims to provide a more accurate way of monitoring TV viewing habits than the traditional - and outdated - panel-based methodology. And the third, TheLADbible, is a digital publishing business that is already enjoying phenomenal success with its mix of viral content and social engagement.

“If someone comes to me with a business idea, there are a few questions I ask myself,” says Tom. “Do I get it? I’ve got to really understand what they’re about. Is the timing right? Being in the right space and having the right product count for nothing if the timing’s wrong. Do I like and respect the people? The chemistry’s got to be there. And finally, what can I bring to the party? I need to know that my networks and my experience can benefit that business, otherwise I won’t get involved.

In a life so full of change and new challenges, there have to be some constants. “Looking back over my life so far there are two things I’ve stuck with,” says Tom. “The first is my marriage - Helen and I have been together for more than 32 years. The second is my connection with ChildLine.”

Tom first came into contact with the charity when he was working for Disney. “ChildLine were looking for people to run the London Marathon for them, so me and a colleague signed up,” he says. “We ended up raising about £26,000. I was invited to the charity and met the chief exec, and it was clear that one thing they were lacking was a strong connection to the media world. I knew that world, I’d been thinking about finding a way to give something back, and I realised this was my opportunity.”

Fast forward 13 years, and Tom is chair of the ChildLine Board, director of the charity’s National Volunteer Board and an honorary member of the NSPCC Council. He helped set up the Monday Movie Club, which offers members exclusive film previews in exchange for an annual fee, and regularly runs major fundraising events: when we speak to him, he is in the throes of organising a gala ball for 600 people that he hopes will add a further £1 million to that already staggering fundraising total. 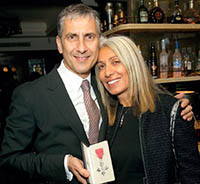 In 2015, Tom was awarded an MBE in the Queen’s Birthday Honours List for his services to children. “I couldn’t believe it when I got the letter,” he says. “I really thought someone was winding me up. Then you have to keep quiet about it until the official announcement is made - that wasn’t easy. The whole experience was amazing.” Here, Tom is pictured celebrating with his wife Helen.

It’s clear that ChildLine has brought a new dimension to his life. “Everyone with any power and influence should get involved with a non-profit,” he says. “People always say they’re too busy. Well, I think I’m pretty busy but you can always make time. And there are so many ways you can help. You can write a cheque of course, but you can also use your networks and your influences. The fact is, there’s a tremendous feelgood factor. It feels really great to be able to make a difference.”

Who has been the biggest influence on your career?

TT: My dad and my grandfather. I learned my commercial skills working in our family restaurant as a kid. I remember my dad dragging me round the markets while he tried to get the best produce for the best price - it wasn’t until years later that I realised that had rubbed off on me. More generally, I think you should always look at the people beside you. If you’re only looking up to your boss, you’re missing out.

What’s been your biggest mistake at work?

TT: In my early 20s, when I was still at LWT, I missed out on a promotion three times even though I felt I was just as well qualified as the other candidates. It was a big lesson in how important it is to understand the politics of a place and to build a strong network. I ended up leaving LWT, but I was able to use that as an opportunity to reinvent myself and apply those lessons.

And your proudest achievement?

TT: I’m pretty proud of my MBE. And while I was at Emap I got to study at Harvard - that was pretty amazing for someone who’d always been such a bad student. I guess I’m proud too of staying true to that principle of always looking for a new challenge.  I’d hate to stagnate. And of course I’m very proud of my wife and family.

Now tell us something surprising about you…

TT: I love cooking. I’ve worked my way through a lot of Jamie and Ottolenghi, and now I’m looking for something new. I’m a huge fan of the theatre, and I still harbour a secret ambition to star in a West End musical.

In 2016’s Hitesh Tailor lecture, Tom explored a question that will have vexed everyone at some point in their career: why does it take so long to get things done at work? He argued that the blame lies at the door of one innocuous-seeming word: maybe. “We’re living in a world of fewer absolutes,” he says. “Today, things are more nuanced. And that is stifling businesses and slowing down progress.”