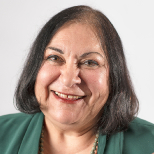 Professor Taraneh (Tara) Dean is a Professor of Health Sciences who is an internationally recognised authority in the area of epidemiology of allergic disorders. As the Provost she is the University’s chief academic officer, upholding LSBU’s academic standards and its core academic mission. She has direct responsibility for LSBU’s academic units.

She is passionate about promoting gender equality in academia, and mentors a number of female academics at universities in the UK. She is one of 21 Advance HE transformed UK Athena Swan Charter panel chairs.

As a member of the Equality and Diversity Panel (EDAP) for the REF2021, Professor Dean advises on the development of guidance and criteria to appropriately recognise equality and diversity considerations in all elements of submissions to the next REF.

In 2020, Professor Dean was appointed as the chair of the International Research Development Network (IRDN) for Universities UK.

Originally from Iran, Tara came to the UK aged 16, as an international student to complete her education. She completed her first degree in Biological Chemistry at the University of Essex and obtained her PhD from Kings College in London in 1989.

Following a post-doc at the National Heart and Lung Institute (now part of Imperial College), she moved to the University of Southampton to establish her own research team in the field of Asthma and Allergy. In 1996, she joined the late David Hide to establish the internationally-recognised Asthma and Allergy Research Centre on the Isle of Wight and completed her training in Epidemiology at the London School of Hygiene and Tropical Medicine. During her time at the Allergy Centre, she led on a number of seminal cohort studies focusing on epidemiological aspects of asthma and allergy, and also took up directorship of the Department of Health-funded Research and Development Support Unit for South East Hampshire and Isle of Wight.

She has published widely and remains research active and continues to deliver lectures and seminars at all the institutions she has been working at.