Ballet companies report that 67-95% of dancers are injured annually with many injuries occurring in the foot/ankle. Obviously, shoes play a vital role in a dancer's performance and safety however, most pointe shoes do not provide well-fitting support or impact dissipation when jumping. The construction of ballet shoes has remained largely unchanged for years, still containing materials such as paper, cardboard, and large amounts of glue. This construction style is not very durable, and in some situations, shoes can need repairing after 10 - 15 hours of use which can equate to a week's use for some professional dancers. 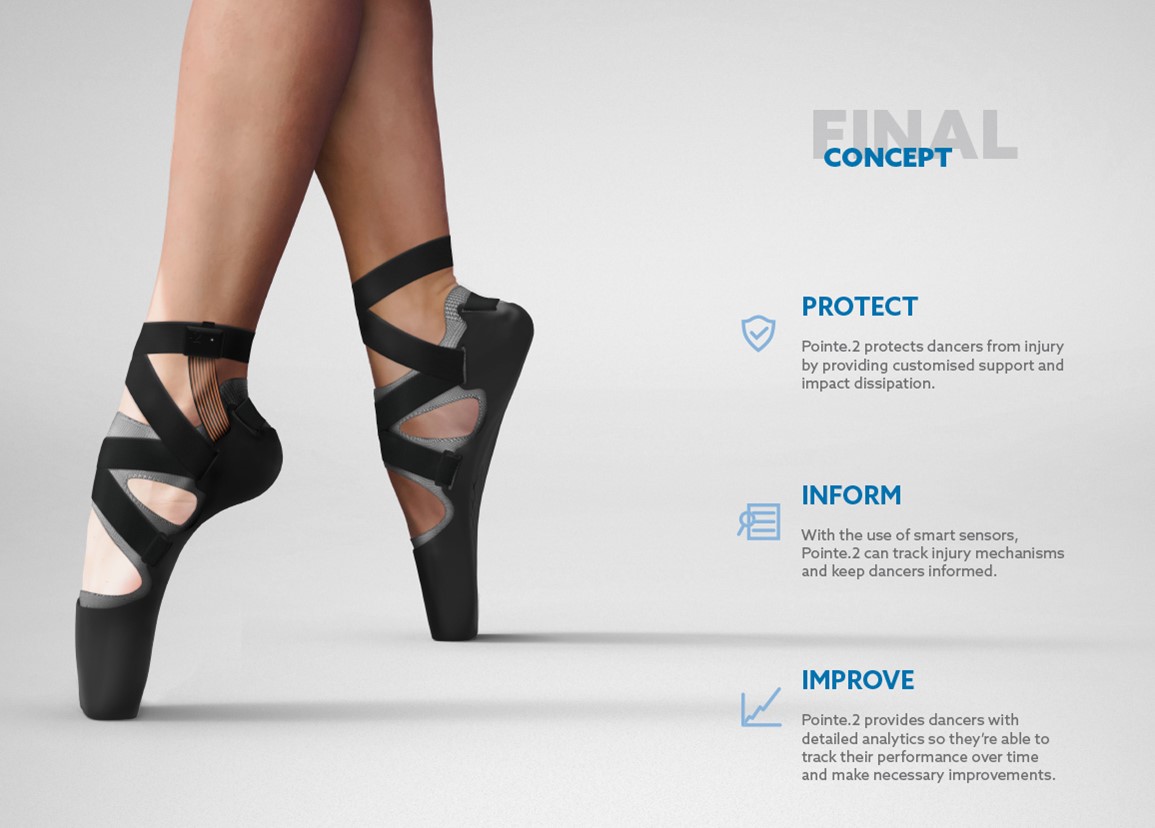 Pointe. 2 is a smart, tailored footwear system to help ballet dancers train better and lower their risk of injury. Each dancer's foot is 3D scanned to produce a custom-fitting, durable elastomeric shell & toe protector. These custom parts provide support while also stretching and adapting to the user's movements. Variable density cushioning modules reduce impact, and a smart insole records the dancer's pressure distribution & galvanic response to detect instances of arousal and infer pain points. Components aren't glued together meaning individual parts can be replaced as they wear out, further increasing the shoe's lifespan. The app also provides load management and allows the dancers to fully track their training and progress.

The elastomeric shell was developed by 3D printing several iterations in 95A TPU. The toe protector was also 3D printed in standard 95A TPU but later progressed to foamed TPU for its softness. 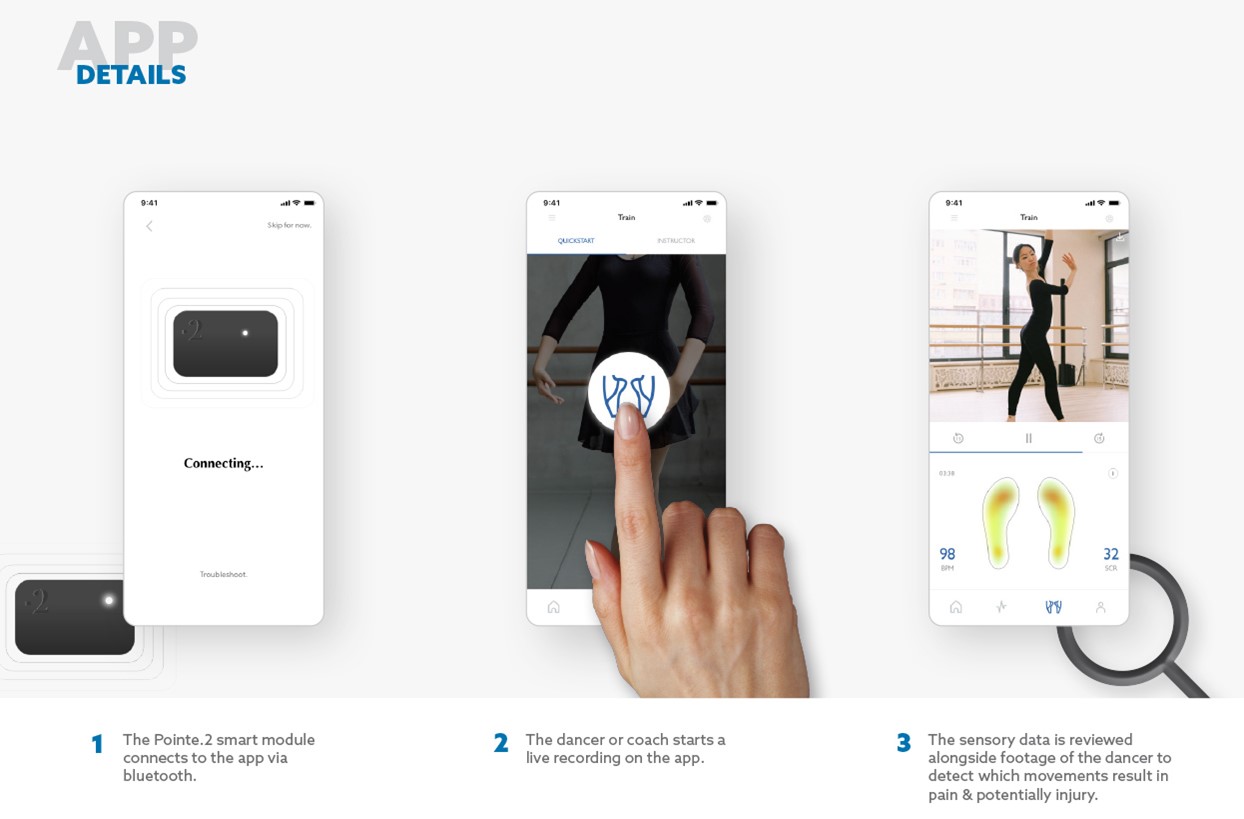 Abdul said: “At LSBU I learned how to interrogate set briefs and developed a methodology to solve complex problems across different products, systems, and services. By the end of my course, I was able to work logically to achieve product specification and make the product design process as predictable as possible.”

Miah’s project ‘Vivetell’ is a pair of ergonomic police handcuffs that monitor both oxygen saturation and heart rate of an apprehended person during an arrest.

Miah wanted to address the divide between the public and their police force, especially after the death of George Floyd and the Black Lives Matter movement. Since then, police force conduct has been questioned with concern that there is a bias present against specific ethnic groups; Black and ethnic minorities lost confidence that they are handled without bias. In 2020, 159,000 ‘use of force’ incidents were recorded, with people of colour making up a third of this. Miah’s design journey followed double diamond method with deliverables at each milestone. Initial primary research methods of roleplays, scenarios, and interviews - to validate a strong rationale for the project - were conducted online. Sketch models were made from a variety of materials and the final prototype was manufactured using 3D printing & laser cutting. Vivetell cuffs provide and record auditory feedback should the detainee’s measured vitals drop or exceed what is considered normal. 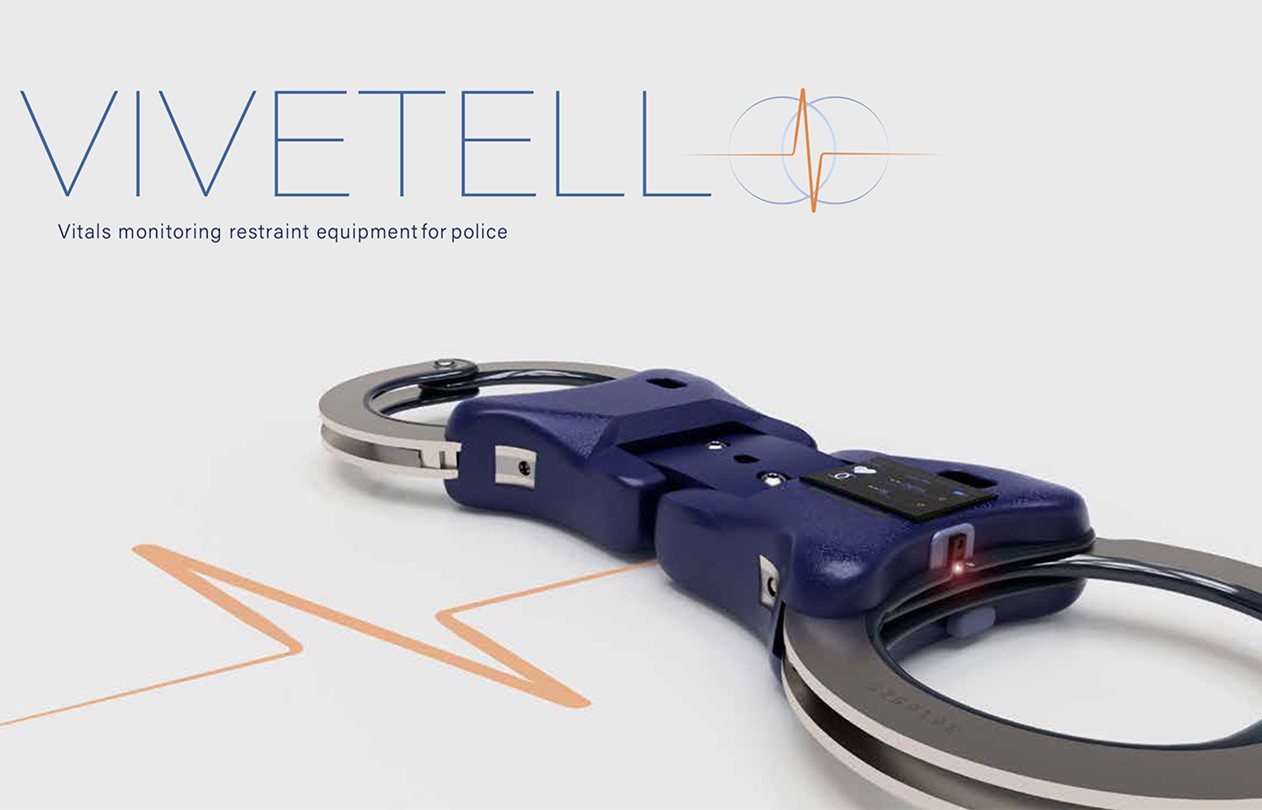 Miah said: “My journey through LSBU aided my personal and professional growth. I gained confidence as a designer and learned how to articulate my creativity both verbally and visually. The learning environment at LSBU was stimulating and supportive; predominantly down to the lecturer’s enthusiasm towards their students even through the Covid climate.

"I am very grateful for my journey at LSBU and endeavour to take the lessons learned forward when in industry as a design engineer. I also look to creating my own products and services that will benefit a large amount of people.”