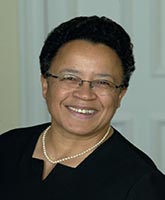 Dame Linda is of dual heritage; her mother was Sierra Leonean, her father English. She studied Russian and Law at the University of Surrey. She then went on to obtain an LLM and a Doctorate in Soviet criminology and penology at the London School of Economics. She became a barrister practising criminal and regulatory law, both prosecuting and defending, later becoming a QC.

Dame Linda is an editor of Archbold, the leading text on criminal practice, and Fraud: Law, Practice and Procedure. She has been involved in the training of lawyers and judges for over 20 years both here and internationally. From 2004–2013 she was a High Court Judge and thereafter was appointed to conduct an historic sex abuse enquiry.

At the time of her appointment as the first non-white High Court Judge, she stated: "Whilst this appointment might be seen as casting me into the role of standard bearer, I am simply a practitioner following a career path. I am confident, nevertheless, that I am the first of many to come."

She is committed to equality and diversity and has, both at the Bar and on the bench as senior liaison judge for diversity, encouraged and supported aspirant lawyers and judges from diverse backgrounds. She has been nominated as one of Britain’s 10 most powerful black women and one of the 100 Great Black Britons.

She actively continues to promote diversity in the legal profession and the judiciary, encouraging students from all backgrounds. She is also an ADR Group accredited mediator and is on their international training faculty.

Nominated by Year 3 LLB student James Opong Nsiah and chosen for the Inspired by Law gallery of lawyers and legal campaigners in 2015.