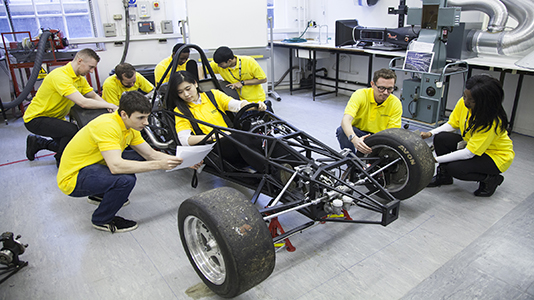 The Formula Student teams are able to add impressive experience to their CVs.

The LSBU teams are formed from students across the School of Engineering. The first team was formed in 2013, focusing initially on researching the competition, design methodologies, manufacturing processes and securing sponsors for the project. With the 2016 Formula Student season rapidly approaching, the team has registered as competitors for the first time as a Rookie Team in Class 1.

Team Leader
The Team Leader has a dual role, focusing on the team's management and contributing to the vehicle design and manufacturing of a chosen part of the vehicle. They have keep the project on track and are responsible for presenting a fully working car at the start of the FS season. The team leader is also responsible for liaising with the team’s Academic Lead, competition organisers and other parties involved in the project, both within and outside the University.
Chief Engineer
The Chief Engineer is responsible for coordinating the manufacture and assembly of the vehicle. Their role includes prioritising the project tasks and allocating resources accordingly from an engineering perspective.

The team can be broadly split up into two smaller sub-teams, each responsible for a different section of the vehicle.