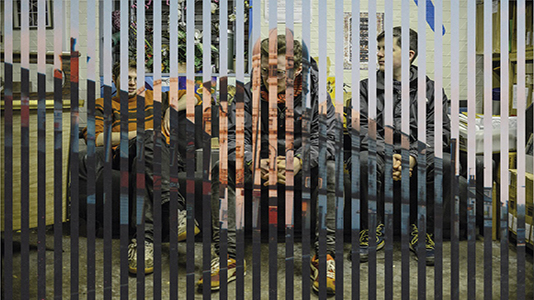 Blood Sport formed in Sheffield in 2010, and ever since the trio have forged out arresting sound practices from within the city's hard-working art/music community. The development is now at the stage of surge and attack, with the band's blistering guitar dynamics and pointed lyrics shuddering and shimmering against rough-housed techno-gilded polyrhythms.

For Blood Sport there is an uncountable urgency that pervades their tightly-wound sound and all that surrounds and informs it.

2015 saw the fruition of a year’s work both in the live and recorded output of Blood Sport, with a keenly anticipated new record Axe Laid To The Root released on Blast First Petite. It follows three EPs plus the essential LP Life In Units, all released on DIY labels - Tye Die Tapes, the band’s own Hybrid Vigour Records and via The Audacious Art Experiment.

Their non‐stop wall of noise and rhythm live show will also be taken into new areas. Blood Sport have a heavily structuralist live show is delivered with ferocious intensity, girding and grinding the audience into movement. With a background playing squats, raves, art happenings and clubs, the band sequence the sets for the dance floor.

A three piece who fuse the immediate attack of punk with the endless rhythmic possibilities of Afrobeat and high life.

Always striving to go beyond the format and to open up new dialogues, Blood Sport have been curating inventive line ups and juxtapositions through their Hybrid Vigour nights in Sheffield. Artists such as Zs, Whilst, King Ayisoba, Flower-Corsano Duo, The Space Lady, Islet, Gum Takes Tooth, Nisennenmondai and more have been involved.

The night's mix of music from all around the world, loose rock and strict dance formulas, a love of raw improvisation, outsider song cycles and UK DIY asthetics can all be found within Blood Sport's new music. Time to play.

A glorious fusion of opposing forces: charging, African-­ensconsed rhythms that lock into endless, melody-­imbued grooves wrangle with seething, disputatious antagonism that come via contorted, electrical fault vocals, guitars that switch from kraut to disco in the twitch of a tom.