The picture on the left is of Fred Ward M.C. He is one of many names listed on LSBU’s memorial to fallen soldiers (bottom right) who attended the CUniversity, back when it known as Borough Polytechnic Institute. When I first came across him, he was just a name on a list, but now he is a man, with a family, who joined the millions in making the ultimate sacrifice for future generations. This is the joy of research. To take a name and give it new found life. The hours spent looking and the feeling of hopelessness, is all worth it for that moment where you find that missing piece.

Life before the war

Fred was born on Christmas Day of 1884 at his home in St. Pancras. He started work at the British Museum, but at the same time he began a career in the military, serving 12 years before discharge in 1913. He married Lilian Hendley in 1905, and went on to have two daughters, Doris Beatrice and Ena Lilian. While there isn’t much of a record of Fred attending the polytechnic, based on the existing evidence, it is within the period of 1901-1911. He was enrolled as a student in the oils, colours and varnishes department. It is also likely that he was part of the colour grinding course, as this was the job his father and uncle had, and the profession he had at the time of the 1911 census. Upon his discharge, he and his young family moved to Bushey, Hertfordshire. When he was discharged, he had achieved the rank of sergeant, but never been to war, but, as for so many in Britain, this was all to change in August 1914.

Fred, like many others, signed up in September 1914, and due to his 12-year army training, became an officer instantly. Between signup and his death, he was involved in 3 campaigns that would form his legacy.

The first was the Battle of Loos in September 1915. This was the first action Fred saw in the war, as he had been in the reserves until now. During the battle, he was injured. He suffered a wound from a shell to his left forearm, which resulted in Fred returning to the UK until his recovery was complete the following year. In the summer of 1916, he returned to France with his original regiment who were no longer reserves. He was at Vimy Ridge on the one year anniversary of his injury, and it was here in the same month that his dugout was hit by a mortar, and while it injured him again, this time he was able to stay on the front.

He was then stationed in Greece in December 1916, to take part in the war in the Balkans. Fred and his division took part in the early stages of the Battle of Doiran, near Dojran Lake in modern day Macedonia. It was held by Bulgarian armies and it was the second attempt to reclaim the land after a failure the year before. Fred and his division played a minor role in the beginnings of the battle, acting as a diversion for the main forces taking part in the battle. Despite the minor role played, Fred Ward was mentioned in Despatches. Despatches were reports sent back by those in charge and details the actions of the army. The end of the report is usually reserved for the mention of specific soldiers who had shown exemplary behaviour or courage.

The final stop on Fred’s journey was in the Middle East. In this campaign, he was awarded the Military Cross for his actions during the campaign in Palestine. He was involved in the final push for Gaza, and perished in the Battle of Jerusalem, which lasted for just a day before the Ottoman Army retreated in the evening. Records cannot tell us how Fred died, however, given the events of the battle, his death could’ve occurred in two ways. Fred and his company were on the front line when they were faced by machine gun and sniper fire, meaning he could’ve perished at this moment. If this isn’t the case, his company were later involved in a bayonet charge which also could have taken his life. Fred Ward is remembered at a commonwealth war grave in Jerusalem, a long way from Borough Polytechnic and his family in Hertfordshire. 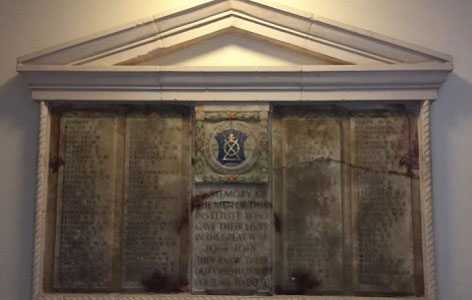 Fred’s story embodies the joys of research. Through archives and historians’ books, I have felt the past. I have seen the writing of men who have helped shape history. They committed the most unselfish act humanity has ever seen, and while this doesn’t repay that sacrifice, it helps turn a statistic into a story, a name into a person and contributes to the act of memorial. This is the joy of research, uncovering and telling the story of those who have come before you, the ultimate act of respect.