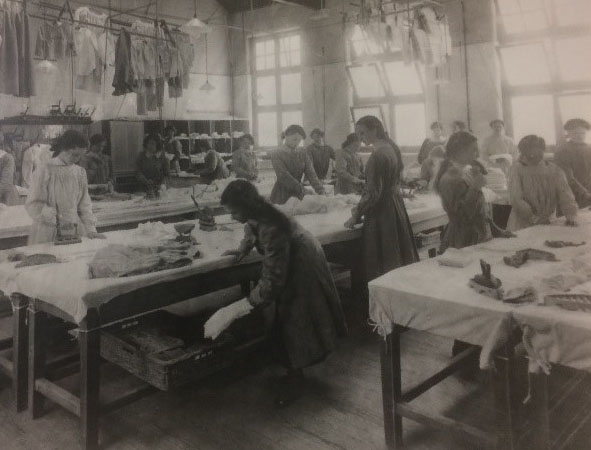 History student, Simran Sahota, blogs on her research into the lives of female students who attended LSBU during World War 1:

As history recalls, the first world war for British women and feminism proved to be a huge asset to proving the worth of women’s work, widening opportunities. This in turn led to a discussion of gender equal education and work, subsequently improving the quality of life of British women as well as a cultural shift in the role of the woman in the home and wider society. The female student experience is often overlooked during the period of war, but knowledge of their experiences can help build a broader, better understanding of society and changes in twentieth century Britain.

The Borough Polytechnic News was the student magazine of the Borough Polytechnic, which eventually became London South Bank University. Every month there was an (admittedly small!) section for and written by the female students and staff. The voices of the female students were expressed under the title of ‘Jottings from the Women’s Side’, in which there were various sub-categories used for points of discussion, the most consistent one being ‘The Women’s Social Committee’ and the different variations of the ‘Club Room Talk’. This was the only forum in which you can find updates and views from the women studying at South Bank.

There were many misconceptions about women being able to participate in sporting activities due to the traditional ideology of femininity not being in correspondence to physical activity during twentieth century England. But as a matter of fact, sports societies for women seemed to peak after 1915. In particular the Women’s Rugby League, The Women’s Swimming and the Women’s Hockey club, which achieved two successful away wins, gained much more attraction than ever before and by the newsletters every monthly issue of 1918, much of their articles predominantly featured the updates of these societies or a meeting about more being created. We can assume that because many of the male students had enrolled themselves into the British Armed Forces the women’s sporting societies received more attention than ever before. This demonstrates a progressive change in how women’s contributions were becoming more visible and respected at Borough Polytechnic.

It is interesting to see also the increasing influence of the rising woman’s suffrage movement playing an active role in the students’ life and society. This can be seen clearly to the dedication of their publications called the ‘Women Pioneers’ in which they provide a historical account of influential women that broke the societal expectations of a woman, two being Florence Nightingale and Elizabeth Blackwell

The courses and learning environment

I’m sure it will come to no one’s surprise when looking into the courses available to take at the Polytechnic through the annual reports, the student prospectus it does not take long to see the gender separation of classes and the different types of studies made available to each sex. Very much based on what is and isn’t considered ‘women's work’.

The women had courses like ‘Dress tailoring’, ‘Skirt Making’, ‘Advanced cookery skills’, ‘Embroidery’ and was typically only offered as part-time courses. Why? Because most jobs available for women, revolved around retail, sewing, tailoring, hand and machine embroidery, the closest they would come to a sit-down learning environment would be basic financial budgeting.

Through photographs, like the ones included here, and various other authentic photographs that can be found at our own University archives we can get a real glimpse into these courses.

The blatant patriarchal standards are easy to find and are almost laughable when reading as a modern student, my favourite being the ‘perfect housewife’ article used to help the students pick the right courses. 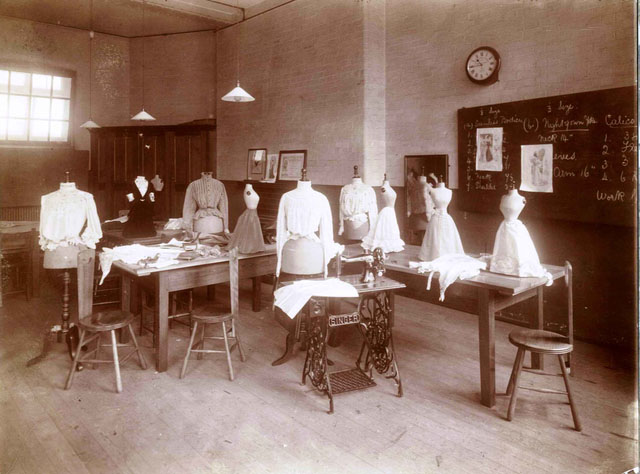 A consistent push however for women at the polytechnic was for volunteer work in aid and nursing, by 1918 there were volunteer opportunities at the fire bigrade. A lot of women’s time outside of class was attending these classes as well as nursing volunteers helping the injured men once they came back home.

Even with the thriving social life a woman could lead, the reality was that the academic experience was not equal to the men.

Nevertheless, the female students were extremely serious and active in their roles, taking influence from each other and the suffrage movement, becoming increasingly more political, independent, visible, demanding change, and as a result challenging the status quo set for studying women.