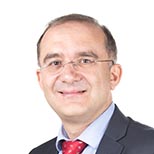 Professor Tasos Dagiuklas is a leading researcher and expert in the fields of Internet and multimedia technologies for smart cities, ambient assisted living, healthcare, and smart agriculture. He is the leader of the Smart Internet Technologies (SuITE) research group at LSBU, where he also acts as the Head of Cognitive Systems Research Centre.

His research interests include 5G networking technologies (Software-Defined Networks, NFV, edge), cloud computing and immersive media technologies. He has published more than 170 papers in these fields. His research has received more than 1800 citations by researchers (Google Scholar). He has served as Vice-Chair for the Institute of Electrical and Electronics Engineers (IEEE) Multimedia Communications Technical Committee (MMTC), Quality of Experience WG, and as Key Member for IEEE MMTC MSIG and 3DRPC WGs.