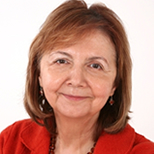 Professor of Education for Sustainability

Professor Ros Wade has an international reputation in the new, interdisciplinary area of education for sustainability (EfS). Ros has been an educator all her working life, and has built up wide expertise across the formal, non formal and informal sectors. She sees herself as an engaged academic who is seeking to be an agent for change towards a more sustainable planet and she tries to put this philosophy into practice in the way she works with others, collaboratively and supportively.

Her early life in India where she was born and brought up shaped her interests in development and led her to work for Oxfam for 15 years before joining LSBU. This experience has ensured that her research and scholarship is grounded in the practical needs of stakeholders and that it is relevant to real world applications.

As Director since 1998 of the Masters programme in Education for Sustainability she has led a team of experts in developing this emerging area which brings together the natural and social sciences. The programme has received national and international recognition and endorsement for its academic quality, cutting edge intellectual development and for its transformative effects in empowering agents for change. It has developed an active global learning community of students and alumni which is influencing policy and practice worldwide. It has been endorsed by the QAA and recognised by leading UN agencies in this field, such as UNESCO and UNEP as well as national agencies and organisations like Oxfam and WWF. In 2009 she was presented with the London Company of Educators' Award for her achievement in the field of EfS/ESD.

In 2009 she was invited by the Secretary of State for International Development to become a UK Commonwealth Scholarship Commissioner and among her many duties, she took on the role of Gender champion . The work of the Commission is mainly funded by DfID, FCO and BIS and this invitation represents national recognition of her particular expertise in education, development, EfS and distance learning.

In 2010, she led the team which achieved accreditation from the UN University for LSBU to develop the London Regional Centre of Expertise in Education for Sustainability which she now chairs. London is the only European capital city so far to achieve this.

In her spare time she enjoys gardening, visiting art galleries, and singing in a local choir. She is also a member of the Poetry Society and runs a regular local poetry group.

Ros has taken the academic lead in developing the pathfinder EfS programme.  She has also  edited and written a number of teaching  resources which  have been very well received by the EfS community, by EfS participants   and have been singled out for praise by QAA.  Examples include 'Learning, Leadership and Climate Change' (2013) and 'Values and Participation local to Global' (2012). In addition she edited and co-wrote  the collection of EfS research  by participants of the programme and which included  a key chapter (Wade, R 'Journeys around EfS: mapping the terrain' from Wade, R and Parker, J (eds) 'Journeys around Education for Sustainability' 2008 LSBU, WWF and Oxfam pp 5-33).

As an expert in distance learning, Ros has  encouraged a culture of innovation in design and delivery of learning materials  and  this is demonstrated by the new E learning course for site based educators, which has been developed in partnership with the UK Field Studies Council, RSPB, London Wetlands Trust, Botanic Gardens International, London Zoological gardens. In addition, the masters programme has been included as a UNEP case study in the 2011 publication on Global Universities Project for Environmental Sustainability.

Ros has always highly valued the rich diversity of student experiences from many different backgrounds and contexts, and this is reflected in the teaching materials. This was acknowledged by the QAA  'The diversity of experience and background within distance learners is recognised as a strength and as a resource for teaching and learning'.

Ros was a key member of the  team  which set up the first professional doctorate in LSBU  and  taught on the programme until spring 2010. This is the first Education doctorate in the UK with a focus on sustainability, equality and diversity. She has also  developed a growing PhD programme in EfS  and is currently supervising number of   doctorate students.

Ros Wade's  main research interests include: Education for Sustainability (EfS), in particular, Quality education and EfS, Education for All and EfS, learning communities of practice for EfS  and more recently,  Politics and  EfS.

Ros  is a member of the Weeks Centre for Social and Policy Research and is a Research Fellow at the Schumacher Institute for Sustainable Systems. She is also chair of London RCE and  a long standing member of CCCI's management group and TEESnet.

Ros  has also served on the UNESCO UK national co-ordination group  for ESD and is a member of the UNESCO ESD international Teacher Education Network (IN). As a research consultant for UNESCO , Ros is  considered  to be a global expert  in the area of Education for All (EfA) and ESD synergy.  Her key paper (with Jenneth Parker) has been translated for use in a wide range  of countries, such as South Korea, Japan, Pakistan, France,  Spain.

Her research portfolio includes work for WWF and  Oxfam and in 2007, with Glenn Strachan,  Ros completed a research project for the UK Centre for Excellence in Leadership (CEL). The project aimed to build understanding of catalysts and blocks to leadership for sustainability in the learning and skills sector. This project involved interviewing Principals and Vice Principals of FE colleges, key civil servants, as well as wide consultation with the sector.  The  Research report Leadership for Sustainability: making sustainable development a reality for leaders'  (CEL 2007)   was presented at CEL's  conference to on 16th May 2007   and adopted into their strategic planning.

Ros has published widely and has given keynotes at a number of international conferences including  New Technologies, Education for Sustainable Development and Critical Pedagogy', at the University of Rethymnon (2012) and  the UNESCO Forum of Asia Pacific ESD facilitators and educators, Tokyo, Japan, 2009.

Ros has participated in  a specialist panel on Politics and ESD for three years running with Hugh Atkinson at the Political Studies Association Conference. She has  presented three papers so far and has helped to set up a specialist group at the PSA. Ros is co editing a book called 'The challenge of sustainability: linking politics, education and learning' for Policy Press to be published in 2014.

Ros is a member of the Political Studies Association (PSA) and part of the specialist group on Politics and Sustainability.

She is also a Research Fellow of the Schumacher Institute of Sustainable Solutions (Bristol) and a member of the Weeks Centre for Social and Policy research.

She is Chair of the London RCE in Education for Sustainability, a body which is accredited by the UN University  as one of the initiatives of the UN Decade of ESD 2005-2014.

Ros has been a  member of the management group of CCCI and of the Humanities Education Centre, Tower Hamlets for many years. This centre is known for its  pioneering, innovative work in  schools on social and environmental justice.

For five years Ros  was  a member of WWF's Programme Committee, an influential body which advises the WWF Trustees on policy and governance. From 2011 she  continued her involvement with WWF as an invited  WWF Fellow.

Ros is also a member of the UNESCO International ESD Teacher Education network (IN), the Council for Education in the Commonwealth and the steering group of TEESnet.

Ros is a reviewer for a number of publications including:

She is also a member of the international editorial board for the journal Policy and Practice (Centre for Global Education).

Ros has been a UK Commonwealth Scholarship Commissioner since 2009. This is a public body which is charged with responsibility for managing a wide range of scholarships, mainly for students in developing countries and for overseeing a multi million pound budget. The work of the Commission is mainly funded by DfID, FCO and BIS. As well as serving on the Awards Committee, Ros is a member of the Monitoring and Evaluation Committee which has been responsible for monitoring the impact of scholarships, for example, in relation to key issues of Democracy and Governance and Environment and Climate Change. One of DfID's key aims is to achieve gender parity in development interventions and Ros was also asked to lead on the Commission's Gender strategy. In conjunction with this, she has spoken on a number of platforms including the UK Commonwealth Scholars' Welcome Day in 2013 and at a Commonwealth Day event in 2012 at the House of Commons.

ACCU (UNESCO Japan) has involved Ros as a research consultant from 2009 onwards to help to shape the process of EFA ESD synergy and her publication (Wade, R and Parker, J (2008) EFA-ESD Dialogue: educating for a sustainable world Policy dialogue no 1 UNESCO, Paris) has been a key document for a number of conferences and events in Japan from 2009 onwards. ACCU is the lead organisation for ESD and EFA in the Asia Pacific region and has played a leading role internationally in promoting the need to bring the two global education agendas together in order to maximise the effectiveness of education policy worldwide.

Ros has been a member of the management group of the Humanities Education Centre, Tower Hamlets for many years. This centre is known for its pioneering, innovative work in schools on social and environmental justice.

For five years Ros was a member of WWF's Programme Committee , an influential body which advises the WWF Trustees on policy and governance. From 2011 she continued her involvement with WWF as an invited WWF Fellow.

As chair of the London Regional Centre for Expertise (RCE) in Education for Sustainability Ros has been involved, with the co-ordinator Lynn Vickery, in developing a number of projects. The RCE involves stakeholders from the sectors of business, civil society and local government and from across all education sectors, including community, FE, schools and HE. The steering group comprises the lead organisations in EfS/ESD in London, including the London Sustainable Schools network, SEEd (Sustainable Environmental Education), WWF-UK and Wastewatch as well as a number of other HEIs, such as the University of East London.

In 2013 Ros was invited to become a Research Fellow of the Schumacher Institute for Sustainable Solutions, Bristol.