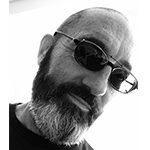 Philip Hammond is Professor of Media and Communications in the School of Arts and Creative Industries. He is the author/editor of seven books and of many journal articles and chapters in edited collections. He is course director of BSc Criminology with Journalism, BA International Relations with Journalism, BA Politics with Journalism and MA Journalism with Development Studies.

Professor Hammond is interested in the relationship between the media and the political disorientations of our post-ideological era. Much of his work has focused on the role of the media in post-Cold War conflicts and international interventions, and he has
extended this to look not only at the news media but also film and video games.

In 2017-18 Professor Hammond was Principal Investigator for an AHRC-funded research network on war and games, and he recently completed a book on Climate Change and Post-Political Communication (Routledge, 2018).

He is also on the editorial boards of Media, War & Conflict, the advisory panel of JOMEC journal, and the international advisory board of the Working Group on Syria, Propaganda and Media.