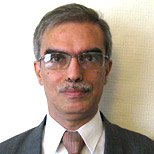 Prof Ghavami is in the Department of Electrical and Electronic Engineering, School of Engineering. He is the founder and leader of the Bioengineering (BiMEC) Research Centre. His research interests include UWB signal processing, biomedical applications, adaptive antenna systems, and wireless technologies.

Prior to LSBU, he was with King's College London, from 2002 to 2010, Sony Computer Science Laboratories Tokyo, from 2000 to 2002, and Yokohama National University from 1998 to 2000. He has authored the books, Ultra Wideband Signals and Systems (Wiley 2007), and Adaptive Antenna Systems (Wiley 2005), and has published over 180 technical papers mainly related to UWB technology, smart array antenna systems and biomedical signal processing. He holds three US and one European patents. He won the esteemed European Information Society Technologies Prize, in 2005, and two invention awards from Sony.