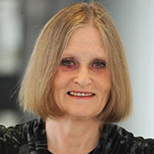 Professor Bridget Shield was Professor of Acoustics in the School of The Built Environment and Architecture at London South Bank University. She retired from the University in May 2014 and was honoured with the title Emeritus Professor.

She obtained a BSc and MSc in Pure Mathematics at the University in Birmingham, before studying for a PhD on the prediction of noise levels in factories. She was appointed as a lecturer at South Bank Polytechnic in 1986, since when she has been active in teaching, research and consultancy in environmental and architectural acoustics.

She was course director of the MSc in Environmental and Architectural acoustics for many years and has received many government research grants and is the author of around 150 published papers. Her research interests have included prediction of industrial noise, community response to railway noise, concert hall acoustics, annoyance caused by low frequency noise and hospital noise and acoustics. For the past fifteen years her research has focused on the effects of noise and poor acoustics on children and teachers in primary and secondary schools.

In 2003 Professor Shield was appointed by the Department for Education and Skills as editor of Building Bulletin 93 (BB93) which contains the acoustic performance specifications for schools required under the Building Regulations of England and Wales. She is currently a member of the BB93 review panel.

She was an author of the UK Department of Health report on the effects of environmental noise on health, published in 2010. Professor Shield was elected an Honorary Fellow of the UK Institute of Acoustics in 2007, and was awarded the R W B Stephens medal by the Institute in 2011. In 2011 she also received the John Connell Lifetime Achievement Award from the Noise Abatement Society.

Professor Shield has been active for many years in the UK Institute of Acoustics of which she is currently President (2012-2014). She is also a member of the British Society of Audiology and of the Acoustical Society of America.

For the past 15 years her main research area has been investigating the effects of noise and acoustic design on pupils and teachers in primary and secondary schools.  This research has been carried out in collaboration with Professor Julie Dockrell of the Institute of Education, supported by grants from the Department of Health, Defra and EPSRC.  It has shown that both external and internal noise at school have detrimental effects upon pupils' learning and academic performance, cause annoyance and affect concentration, and can cause voice problems among teachers.

The research has informed the 2003 Building Regulations (and their 2013 revision) on the acoustic design of schools.  Currently Professor Shield is supervising PhD projects on speech intelligibility and teachers' vocal health.  Another research area was the acoustic design of hospital wards and its effects on patients and nursing staff, in collaboration with the Medical Architecture Research Unit and supported by EPSRC and Arup Global Health Care.

Bridget has also carried out personal research into the history of the acoustic design of the Royal Festival Hall, and into the economic and social effects of hearing loss.  She acts as a reviewer for the major acoustics journals, and has been external examiner of PhDs at many UK universities.

Professor Shield is a member of the British Society of Audiology and the Acoustical Society of America.