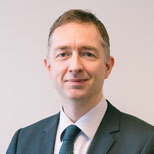 Prof. Barber’s interests are in materials engineering and particularly the mechanical behaviour of composite-like structures. Many research activities have focussed on constituents with reduced dimensions, such as polymeric nanofibers, carbon nanotubes and graphene, and the building blocks used to assemble biological structures. Such research has often required the development of novel mechanical and imaging techniques. These interests have a broad range of applications from tissue engineering and healthcare to lightweight materials used in transport.

Prof. Barber has published extensively and has secured over £5M in research funding from government grants as well as direct support from industry. Prof. Barber currently holds committee membership of the Royal Microscopical Society and holds editorial positions in MRS Advances and Frontiers in Materials. Prof. Barber was the recent chair of the conference Tomography for Scientific Advancement (ToScA) 2017 and has held led numerous session in conferences included Microscience and Microanalysis, Materials Research Society meetings and the Gordon Conference in Thin Films and Small Scale Behaviour.