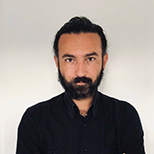 Dr. Kamiloglu teaches Public and EU Law and International Human Rights & Development and International Law and Human Rights. Previously at various other institutions he has been teaching Public International Law, Public Law, Criminal Law, Contract Law and Legal Theory modules and he has designed modules on social movements and human rights. He is also an Associate Fellow recognition by the Higher Education Association of the UK.

There are two separate but linked areas of Dr. Kamiloglu’s research.

In the first path, he looks at human rights activists from the Global South, their understanding of human rights discourses in various countries, how discourses of HR travel through International Law, INGOs, NGOs and finally society. Concepts of violence, utopias, formation of ideologies and its aesthetics, neoliberalism plays an important role in his research.

Thesis: “Human Rights from Below: Neutrality, the Subject, and the Revolutionaries” (2019)

Founder and trustee, Centre for Democracy and Peace Research, a non-profit organisation for supporting and promoting academic freedom and critical knowledge production in Turkey.

Advisory Board Member, Izmir Centre for Right to the City.

From 2015 – Associate Fellow of The Higher Education Academy in Law in recognition of attainment against the UK Professional Standards Framework for teaching and learning support in higher education.

Founder and trustee, Centre for Democracy and Peace Research, a non-profit organisation for supporting and promoting academic freedom and critical knowledge production in Turkey and Advisory Board Member, Izmir Centre for Right to the City. In addition to this Dr Kamiloglu has organised many conferences some of which are:

09.2019 Co-Organised Stream: Towards the abolition and realisation of the Critical Law School?, Critical Legal Conference, University of Perugia

09.2016 Organised Stream: Responses to loss of the political: Intellectuals, Humanitarians and the Revolutionaries, Critical Legal Conference, University of Kent.

06.2016 Co-Organised Stream: “Objects of memory and rituals of memorialisation as fields of struggle”,London Conference in Critical Thought, stream organised with Federica Rossi, conference organised with the LCCT collective, Birkbeck College.