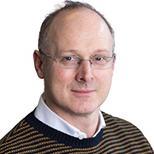 Michael is a Senior Lecturer and Solicitor. He teaches contract law on the CPE and aspects of international business law on the LLM in International Commercial Law.

Prior to joining LSBU, Michael was a partner at Hogan Lovells and was head of the firm’s Russian capital markets, restructuring and pro bono practices. Michael has spent more than 8 years living and working in Russia and is a fluent Russian and French speaker.

Michael advises on legal and commercial issues in the international business sphere and is a member of the CityUK’s AIFC Financial Regulation Working Group.

Michael is a non-executive director and his research interests in corporate governance reflect this. Michael is also engaged in researching the enforcement of foreign arbitral awards in the former Soviet Union.

Michael is passionate about emerging markets, travelling, equestrian activities and even runs a literary festival in Llangwm, Pembrokeshire.

Michael is interested in the dynamics that produce the most efficient results in organisations. His interest is particularly focused on finding the ideal composition in management and directors’ boards.

Member of the Law Society of England and Wales.