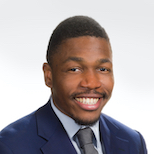 Michael Abiodun Olatokun is researcher, activist and educator.  Since 2016 he has been a Research Fellow at the Bingham Centre for the Rule of Law where he is also the Head of Public and Youth Engagement. Michael’s work at the Bingham Centre involves educating young people across the world about democracy.

Michael teaches Tort as part of the Contract and Tort module.

Michael is currently conducting a systematic literature review of public legal education evaluations for the Legal Services Board, the regulator of the legal profession in England and Wales. During the EU referendum Michael conducted focus groups with young voters to better understand the barriers to their participation in politics, informing the government of key areas for improvement in their information campaigns to promote voter engagement.

Fellow of the Royal Society of the Arts

Association of Chairs of Nonprofit Organisations

Michael is a leader in the charity sector and has sat as a non-executive director of several boards. He is currently a trustee of Law for Life (The Foundation for Public Legal Education) and The Diana Award. For three years he was a trustee of the University of Westminster Students’ Union, serving as chair for two years. In that capacity he led the organisation through a significant restructuring exercise. Michael has been a supporter of young people’s participation in politics throughout his career and was also a trustee of the British Youth Council from 2015-2016. Michael mentors university students looking to build careers in the charity sector, and advises community groups looking to increase their impact on an ad hoc basis.