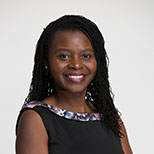 Manyara trained as a Mental Health Nurse at London South Bank University where she earned a Diploma in Higher Education – Mental Health Nursing. She went on to work at the Centre of Excellence Maudsley Hospitals in South London and Maudsley NHS Trust where she progressed from Junior Nurse to Clinical Charge Nurse.

After years of working in Acute Admissions settings serving the diverse London Borough of Lambeth, she moved to Health Care at Home-Inventive Solutions where she held the role of Nurse Advisor on the Wellbeing project. This role was of particular interest to her as her research interest lay in the interface between Physical Health and Mental Health in people with Severe Mental Illness (SMI). This role involved doing research, working with clients and practitioners and providing wellbeing training to mental health practitioners within NHS Trusts across the UK.

During this time she also earned a BSc (Hons) degree in Health and Social Care with the Open University, as well as a Certificate in Preparing to Teach in the Life Long Sector with City and Guilds.

Following the end of the Wellbeing project, Manyara went to work in Camden and Islington as Physical Health and Wellbeing Nurse Advisor. Her notable achievements included contributing to organising the Wellbeing day event in Camden, which was open to all Camden residents, and aimed at improving access to Wellbeing and Physical Health Services - particularly amongst Black and Ethnic Minority Groups.

Following this, Manyara went on to study for an MSc in Public Health at London Metropolitan University and graduated with Merit. After completing her MSc, Manyara went on to work on the IMPaCT project in the Institute of Psychiatry at King's College University as a Research Worker and Research Therapist. Upon completion of her role on this major study, Manyara joined the Department of Mental Health and Learning Disabilities at London South Bank University as a Senior Lecturer, later Acting Course Director PgDip, and now Course Director for BSc Mental Health Nursing.

Manyara's role in the Wellbeing Project and IMPaCT RCT included providing training and supervision for Mental Health Practitioners. She teaches both pre-registration and CPPD courses.

Manyara has experience of working in both naturalistic studies and randomised controlled trials, and her research interests are in understanding the interface between physical health and mental health. She is also interested in developing and testing health promotion interventions to improve the physical health outcomes of people with Severe Mental Illness (SMI).

Manyara has a Visiting Researcher appointment in the Department of Psychosis Studies within the Institute of Psychiatry, a school of King's College London until 31st March 2017, under the sponsorship of Dr Fiona Gaughran. She has also contributed as a workshop facilitator and teacher at London Metropolitan University.