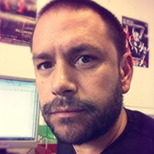 Jon trained in theatre at Rose Bruford College and studied for an MA at the Laban Institute. He has worked as a guest lecturer at the Royal Scottish Academy of Music and Drama, and was a full-time member of academic staff at Drama Centre London, part of Central Saint Martin's College of Art and Design.

He has worked at LSBU as a visiting tutor since 2009, however, in 2012 he took a position as part-time senior lecturer in Drama and Performance. Jon's practice centres on Dirty Market Theatre, a theatre company he set up in 2007.

Jon's teaching centres on acting and directing techniques and devising practices. He lectures on theatre history and with a special passion for Ancient Greek drama, Shakespeare and the Avant-Garde.

Jon's research is practice-based and centres around his work with Dirty Market Theatre Company.

The vision is to cultivate an ongoing dialogue with the audience, with events open to offshoot projects.

2009 - BACCHAEFULL - responds to the Ancient Greek myth with personal explorations of joy, violence, altered states and alter egos.  It is a contemporary piece of total theatre that asks its audience whether they dare surrender to chaos and unreason.

"...this scintillating new version of Euripides' Bacchae'... in a huge abandoned saw mill in Peckham... made for a unique, exhilarating experience... There are certainly thrills to had from Dirty Market." - Jonathan gibbs (Time Out)

"Bacchae is shocking and ambiguous, and Dirty Market Theatre's production embellishes the play but preserves its power." - Ellen West (The Culture Show)

"...Dirty Market Theatre is a lively company with good ideas and strong performers. Their innovative dynamism is certainly promising and bodes well for an exciting future."-Charlotte Loveridge(Curtain Up)

"...the overall impression is one of magnetic chaos and subtle power games. Definitely a play that needs experiencing." - Alice MacKenzie (Extra! Extra!)

2011 - SOMETHING ABOUT YOU (makes me want to hurt you) - Set amongst the decayed, stained-glass splendour of rediscovered gem, Asylum Chapel Peckham, Something About You...  fuses theatre, dance and art to take the audience on a journey into a mythic past. Inspired by Electra, this lyrical, comic, sometimes violent piece is a call to action: stop waiting for heroes and take your own authority, if you really want to feel alive.

"This show is good: inventive, intelligent and interesting... If you're in or near Peckham I recommend you see Something About You, as it's well worth the trip" "" Katy Darby (Plays to See)

2012 - BE GOOD REVOLUTIONARIES - 1967. A compound. Somewhere in the jungle... In the hideaway house of a rebel leader's family, we enter a world of rituals and secrets. A stranger knocks on the door and a revolution is born.

"This manic requiem of misdirected zeal is performed and directed with sharpness and hunger." - Time Out

"The show packs a visceral punch and demands both attention and respect." - What's on Stage.

"What you take away will depend upon what you bring to it, but whatever you take as its meaning it has an irresistible theatricality and physical presence that hold the attention" - British Theatre Review.

"The evening hits peaks with set-pieces of great theatricality." - One Stop Arts

"It establishes a spellbinding atmosphere of surreal menace, and creates many powerful moments and images." - Plays to See.