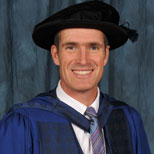 Greg Searle's life has always revolved around sport. As a schoolboy in Surrey, he was a keen rugby player. He began rowing aged 13, inspired by Martin Cross's gold medal performance at the 1984 Olympics in LA. 'I chose to make the best of myself in a sporting way,' he has said. 'Academically I didn't fly, but in sport I found my passion, encouragement and enjoyment.'

Success soon followed. In 1988, he made his debut at the Junior World Championships, and became only the second British junior to win two gold medals. He was also the first athlete to be selected for both junior and senior World Championships in the same year, rowing in the men's eight alongside his brother Jonny.

That partnership was to prove a successful one, culminating in the breathtaking Olympic coxed pairs final in Barcelona in 1992, when the Searles snatched the gold medal on the finishing line. At the time, Greg was still studying for his degree in Estate Management at LSBU, which included a year out in industry working as a chartered surveyor. So modest was he about his talents that one tutor didn't even realise Greg rowed until he saw the story on the news.

In the following year, 1993, the brothers added a World Championship gold to their tally. Both were subsequently awarded MBEs. Greg went on to compete at the Olympic Games in Atlanta, where he won bronze, and then at Sydney in 2000. Although he then took a step back from rowing, it was not long before his physical prowess and team working skills brought him to the attention of the British America's Cup team, and he sailed in the 2002 AC Challenger Series.

Since then, he has focused on building his career as a partner in performance development consultancy Lane 4, working alongside another Olympic champion, swimmer Adrian Moorhouse. Given the demands of his busy professional life and a young family, it seemed that his days of competing at the highest level were behind him.

But then, at the age of 37, he made a bold decision: to return to competitive rowing and seek a place at the London 2012 Olympic Games. 'I wanted to be part of the Games,' he said at the time. 'It seemed to me that opportunities to be part of something as special as this were pretty rare.'

In order to secure his place, Greg threw himself into a tough training regime, spending hours on the water and in the gym, pushing himself to the limit alongside athletes more than a decade his junior. It meant plenty of pain and sacrifice, but it was also an opportunity to practise what he had been preaching in his capacity as performance consultant.

'At Lane 4 we spend our time helping individuals and companies achieve their goals and realise their potential,' he has said. 'We put a three-year plan in place that sets out how they're going to get there, step by step. The key thing is to start straight away. So as soon as I realised I wanted to make the Olympic team, I went out to train the very next day.'

Rowing in the men's eight at Dorney Lake, Greg added a bronze to his tally of medals. That's an impressive achievement, some 12 years after he first stepped away from the sport. 'At the age of 40, my attitude was very different,' he says. 'When you're given a chance to do something a little later in life, you really appreciate the opportunity and work hard to make the most of it.'

Greg believes that passion and commitment are the key to fulfilment and success, whether in sport or professional life. 'Find something you're passionate about and engage others to be passionate too,' he says. 'Do it because you care, and it makes you proud, not because you have to. The will to succeed has to come from within. Identify your goal, and focus on that. Work hard, take risks and you will be rewarded'.

Following the London 2012 games, Greg announced his retirement from rowing. But that doesn't mean he's finished with the sport. Now, he is looking to apply his leadership skills to the sport he loves and to which he has made such a massive contribution. 'I'd love to work with British Rowing,' he has said. 'I want London 2012 to have a lasting legacy.'