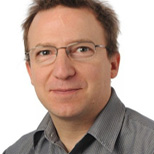 Dr Stephen McKeever is a Senior Lecturer in Children's Nursing in the School of Health and Social Care. Stephen initially trained as adult nurse before completing a conversion course to become a children's nurse in 1997. Since this time his clinical experience has mainly focused on the care of the critically ill child. This experience has been gained in hospitals in the United Kingdom, New Zealand and Australia. Whilst in Australia, Stephen worked for the New South Wales newborn and paediatric Emergency Transport Service (NETS).

In 2012, Stephen graduated with a PhD from The University of Melbourne. His doctoral thesis examined electroencephalogram changes occurring in children during anaesthesia.

During Stephen's clinical experience he was actively involved in providing a variety of education to nurses and the multidisciplinary team. Stephen delivers content to a variety of students from undergraduate to professional doctorate.

As Nurse Consultant Researcher within the Nursing Research Department at The Royal Children's Hospital, Stephen was involved in supporting and promoting the integration of research and evidence into paediatric nursing practice.

Stephen has supervised a variety of students undertaking projects including; pain/sedation practices in critical care and paediatric falls.

An important educational topic is attrition and its subsequent waste of resources. A study across four London HEI’s that Stephen conducted in 2016, explored reasons why children’s nurses left or stayed on pre-registration programmes. This ‘Causes of ATtrition in CHIldrens NursinG’ (CATCHING) study highlighted many areas amenable to improvement.

He is a member of the Royal College of Nursing Children and Young People's acute care forum steering committee. This group provides national representation for members caring for children and young people with acute health care needs.