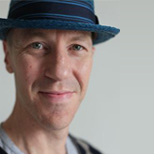 Patrick Tarrant is both a filmmaker and a researcher with a specific interest in the non-fiction modalities, from home video to documentary and the portrait film. Patrick's latest publication 'Montage in the Portrait Film: Where Does the Hidden Time Lie' analyses Pedro Costa's feature length portrait of the filmmakers Jean Marie Straub and Danielle Huillet.

Patrick's most recent film, The Take-Up, screened in the London Film Festival 2014 in the Experimenta Programme, and features a radical misuse of a 16mm film projector playing in front of an HD Video Camera to produce some surprising audio-visual results.

Patrick's Ph.D., 'Documentary Practice in a Participatory Culture' yielded an article called "Camera Movies: Awesome, I F...in' Shot Them!", published in The Journal of Media Practice (2009), along with a 25 minute reflexive documentary called Hubbub, published online in 'Screenwork' Volume 2 (2009).

For more on Patrick's outputs and interests go to http://patricktarrant.com

Patrick has had films screened at many International Film Festivals, including:

Patrick is currently researching the work of London filmmaker Ben Rivers with an eye on the material artefacts produced in Rivers' artisanal practice.