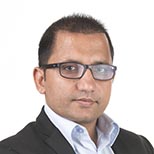 Dr Iqbal is Senior Lecturer in Mobile Computing in the Division of Computer Science and Informatics, School of  Engineering. He is an established researcher and expert in the fields of: mobile cloud computing and open-based networking for applications in disaster management and healthcare; community networks; and smart cities.

Dr Iqbal won an EPSRC Doctoral Training Award in 2007 and completed his PhD from Kingston University in 2010 with a dissertation titled “Design, development, and implementation of a high-performance wireless mesh network for application in emergency and disaster recovery”. He has been a principal investigator, co-investigator, project manager, coordinator and focal person of more than 10 internationally teamed research and development, capacity building and training projects, with total funding of approximately over a million pounds from different international organisations.

Dr Iqbal has more than 10 years of professional experience of working both with industry and academia in the UK, and more than 5 years in South East Asia and the EU. He also co-founded a start-up called SwanMesh Networks Ltd in the UK to commercialise his PhD project, which has been successfully operating for the last six years. He has also won the tutoring Prize Winner Award twice from Association of Business Executives UK, and has recently co-invented a cloud-based interoperable multi-protocol communication system and method (for which a patent is filed in China).

Dr Iqbal is a Member of the Institute of Electrical and Electronics Engineers. In September 2008, he acquired the Status of Foreign Expert from the State Administration of Foreign Experts Affairs, People’s Republic of China.

He is also serving as a Member Board of Governor for United Nation’s Independent Monitoring Association for Child Labour (IMAC), which was set up by the International Labour Organisation’s International Programme on the Elimination of Child Labour (IPEC) from the Sailkot’s soccer ball industry in Pakistan.

Dr Iqbal is also a British Council’s Active Citizen for the implementation of British Council Social Action Projects under Youth, Education and Society.