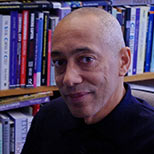 Dr Michael Leary-Owhin is a Senior Lecturer in Planning and Urban Regeneration. He has a national and international reputation for excellence in the field. Before coming to LSBU he worked in local authority planning and has also engaged in planning consultancy for the public and private sectors.

Michael’s PhD was awarded by Goldsmiths College, University of London. He has carried out research funded by the UK government and the private sector. He is a professionally qualified planner, a member of the Royal Town Planning Institute and an experienced expert witness at planning public inquiries.

Michael has been interviewed by the media regarding urban regeneration and public space. His teaching, across several aspects of regeneration and planning, is informed by his research and consultancy practice. His recent publications include: Exploring the production of urban space: Differential space in three post-industrial cities and The Routledge Companion to Urban Regeneration.