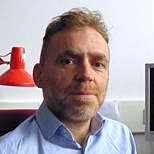 Director of the Institute of Acoustics Diploma and Certificate courses; Senior Lecturer in Acoustics

Luis completed his BEng in Telecommunication Engineering from the University of Madrid. After moving to the UK and taking the Institute of Acoustics (IOA) Diploma in acoustics and noise control, he joined Dyson, a UK appliance designer and manufacturer, where he worked for 4 years as a research and development acoustic engineer.

Later he gained an MSc in Environmental and Architectural Acoustics from LSBU. After graduation he rejoined the University to work as a Knowledge Transfer Partnership (KTP) associate for a three year project involving the acoustic design of Voice Alarm systems (VA) in several London Underground lines.

In 2012, he received a PhD from LSBU for his research on the Design and Optimisation of VA systems in Underground Railway Stations for which the IOA awarded him the Peter Barnett Student Award (2013). For five years he worked as a research fellow at LSBU, where he also lectured on acoustics to undergraduates and postgraduates. Since 2016 he is lecturer in Acoustics and Building Services Engineering in the School of Built Environment and Architecture.

He is currently lecturer and researcher at the LSBU Acoustics Group and is also the course director of the UK Institute of Acoustics (IOA) Postgraduate Diploma and IOA Certificate of Competence in Environmental Noise Measurements (CCENM).

He currently leads at LSBU the development of the new Acoustic Apprenticeship, which is planned to start in Sept 2020.

Luis has taught acoustics at LSBU since 2008. Since 2013, he is the course leader of the Institute of Acoustics (IOA) Postgraduate Diploma and the IOA Certificate of competence of Environmental Noise measurements courses.

He currently leads the development of the new Acoustic Apprenticeship at LSBU, which is planned to start in Sept 2020.

Luis has supervised over 32 successful postgraduate student final projects (Diploma and MSc). He is also a holder of the Postgraduate Certificate in Higher Education (PGCHE) teaching.

Luis is Senior Fellow of the Higher Education Academy

Past research activities include:

Member of academic team for a KTP research project between LSBU and Adande on the development of novel commercial refrigerator.

Conducted research into the potential introduction of basic acoustic education into the performance music curriculum.

Luis has authored and co-authored 30 publications in journals and conference proceeding on acoustics topics and is reviewer of four acoustics journals.

Ongoing research into improving the design and simulation performance of underground stations' VA systems under emergency situations. Aiming at improving public safety in underground transportation. Luis is promoting the creation of a British Standard to provide dedicated guidance on the electro acoustic design and testing of VA systems in underground railways stations.

Ongoing research into the technical and practical suitability of sound sources used in room acoustics measurements.

Luis is promoting and has started research into the introduction of basic acoustics education in the Undergraduate and Post-graduate Architecture training.

Luis has been active in volunteering and charitable activities. He promotes cycling in town and cycling to work.