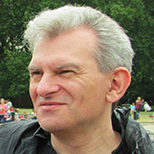 Jon Selig graduated from the University of York, with a BSc in Physics in 1980. He went on to study in the Department of Applied Mathematics and Theoretical Physics at the University of Liverpool and was awarded a PhD in 1984. From 1984 to 1987 he was a postdoctoral research fellow in the design discipline of the Open University, studying robot gripping. He joined the Department of Electrical and Electronic Engineering at South Bank Polytechnic in 1987. In 1992 the Polytechnic became a University, and in 1999 he transferred to the School of Computing, Information Systems and Mathematics. In 2008 this school became part of the Faculty of Business, and in 2015 he transferred to the School of Engineering. Jon's research interests can be summarised as the applications of modern geometry to problems in robotics.

Jon has taught across a wide range of subjects and at all levels from pre-degree to postgraduate. In 1992 he taught two sophomore mechanical engineering classes at City College, New York. In 2011 he gave a 10 hour lecture course to Undergraduates at Politechnika Wrocławska Instytut Informatyki, Automatyki i Robotyki, Poland. He is a regular lecturer on the international summer school series on Screw-Theory Based Methods in Robotics.

Jon's work concentrates on the applications of modern geometry to problems in robotics and the theory of mechanisms. In recent work, some classical algebraic geometry was used to investigate typical geometric constraints imposed by simple linkages. This also has application in the kinematics of simple mechanisms, in particular enumerating the number of postures for a general 6R serial manipulator is reduced to a simple homology computation. Another strand to his work recently has been to use differential geometry, in particular Lie theory, to study the typical kinematic equations of vehicles. These left-invariant systems are non-holonomic because the possible forces or controls only occupy a subspace of the Lie algebra to the group of rigid-body displacements. This led to a classification of the Lie triple systems in the Lie algebra of the group of rigid-body displacements.

For a full list of Jon's publications, see his Google scholar page.

Jon is a Member of the Scientific Committee for the biannual International Symposium on Advances in Robot Kinematics.  He is an observer of the IFToMM (International Federation for the Promotion of Mechanism and Machine Science) Technical Committee on Computational Kinematics. He was also an associate editor for the ASME Journal of Mechanisms and Robotics from 2012 to 2016.