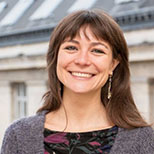 Dr Rossi is a Lecturer in Criminology at the School of Law and Social Sciences. She was previously a postdoctoral researcher at the Ecole des Hautes Etudes en Sciences Sociales (France) and a Lecturer at the University of West London and Royal Holloway. She holds a PhD in Political Sociology from the Université de Paris X Nanterre (France) and she has been researching and teaching in universities in Italy, France and the UK for the last ten years.

She has a significant teaching and research experience in Criminology, Sociology and Political Science. Her research intersects these three disciplines, as she is interested in the criminalisation of political movements, political violence and politically motivated crimes, critical approaches to the study of terrorism and counter-terrorism, and victims’ movements.

Dr Rossi’s teaching interests include criminological and penal theory, sociology of law and justice, social movements and the social history of political ideology, and qualitative methods of research. She has taught at undergraduate and postgraduate level at the University of West London, the Royal Holloway International Study Centre, Université de Paris X Nanterre (France).

Her doctoral research examines the judicial and political treatments of the “years of lead” in Italy and their effects on the criminal justice system and on history-writing. It analyses emergency and anti-terrorism laws adopted in Italy (1974-1987)  and shows how these have had a long-term effect on the interpretation of history and political violence. Her thesis focuses on the Italian case but opens to European comparisons and broader questions about the relation between history writing and criminal laws, judicialisation and victims mobilisations, antiterrorism laws and changes in the criminal justice system. She is currently writing a book out of her PhD thesis and the publication is expected in 2018.

Her current research focuses on the mobilisation of victims of terrorism in Italy and Europe. With a comparative perspective, she explores the ways these mobilisations impact on the European legislation (memory laws, antiterrorism, penality) and evaluate the influence of victims on the legal and social definitions of terrorism.

She has presented the outcomes of her current and previous research at many national and international conferences, and in published articles and book chapters.

She is part of a collective research project on ‘Criminalisation of dictatorial pasts in Europe and Latin America in global perspective’ co-founded by the AHRC ‘Care for the future’ (UK) and the Labex ‘Pasts in the present’ (France).

Since 2010, she has also been involved in the organisation of the Florence International Women Film Festival Cinema e Donne (Italy).