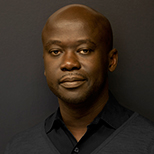 Sir David Adjaye KCVO OBE is one of the world's most recognisable and influential architects. Born in Tanzania, where his father was a Ghanaian diplomat, he decided on his future career at an early age. "I just wanted to do architecture because I loved it," he has said. "Nobody was going to stop me." He studied architecture at London South Bank University (LSBU), before training with David Chipperfield and Eduardo Souto De Moura. In 1994 he started his own practice at the age of just 28.

Since then, David has made his mark all over the world. In his hometown of London, he has designed a series of dramatically beautiful private homes and worked with Tower Hamlets Council on Idea Stores in Poplar and Whitechapel. He designed the Stephen Lawrence Centre in Deptford, which aims to encourage disadvantaged young people to pursue careers in architecture and urban design.

Further afield, high-profile projects include the Moscow School of Management in Russia, the Smithsonian National Museum of African American Culture and History in Washington DC, USA, the new Museum of Contemporary Art in Denver, USA, and the Nobel Peace Centre in Oslo, Norway. While critics swoon over his ingenious use of materials and apparent ability to 'sculpt' light, he claims not to have a signature style. "What's the point of building if you're just doing the same thing over and over again?" he has said. "That would kill me."

He has also worked closely with artists, including Chris Ofili and Olafur Eliasson. In 2010, the Design Museum put on an exhibition of his own photographs showing the architecture of Africa's capital cities. "I wanted to show the everyday experience of going to school, to court, to parliament, especially to young African kids who might not have been back to the continent," he says. "Of course, Africa is about great architecture too and that's something we should be proud of."

David's glittering portfolio and high public profile have put him in demand as a teacher and presenter, and he is currently visiting professor at Princeton School of Architecture, USA. He is the co-presenter of the BBC's Dreamspaces, and has interviewed seminal Brazilian architect Oscar Niemeyer for BBC radio. He has also presented a BBC documentary, Building Africa: The Architecture of a Continent.

In 2007, he was awarded an OBE for services to architecture. In 2017 he was awarded Knight Commander of the Royal Victorian Order in the Queen's New Year Honours list.