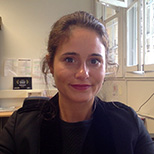 Clara is also co-convener of the BISA Working Group on “Emotions in Politics and International Relations,” with Naomi Head (Glasgow) and Amanda Beattie (Aston).

Clara’s current research is broadly situated at the intersection of critical security studies, US foreign policy and feminist writing in IR. She is particularly interested in the ways in which Islam has been securitised since the September 11 attacks and the subsequent (counter)-radicalisation discourses and practices in the United States and the United Kingdom. She explores how elite speakers like the president of the United States, the police and the intelligence community in the US construct the threat of terrorism. She is also interested in the emotion and visual Turns in international relations, in particular the affective and visual responses of solidarity to victims of terrorism such as ‘Je suis Charlie’, ‘Peace’ and ‘I heart MCR’.

Dr Eroukhmanoff would be interested to supervise PhD Students in those areas:

Clara thoroughly enjoys teaching and building a strong relationship with her students. Her philosophy of teaching relies on developing a critical approach to IR by turning the subject ‘on its head’ from the second half of the term.

She was awarded ‘best teacher in improving the life of students’ at Royal Holloway in 2017.

Clara’s current research is broadly situated at the intersection of critical security studies, US foreign policy and feminist writing in IR. One strand of research examines the linguistic and emotional constructions of terrorism and radicalisation in the United States from the G.W Bush to the Trump administration. She is more particularly interested in what she refers as an ‘indirect securitisation,’ a securitisation that occurs through indirect securitising speech acts and the affective process of indirect securitisations.

Clara is also interested in how gender is intertwined with international security, for example, what Trump’s comments about “grabbing them by the pussy” and his justification that this was mere “locker room banter” can say about hypermasculine military practices.

Her more recent work interrogates the visual responses communicated through memes like ‘Je suis Charlie,’ ‘I love Manchester’ and ‘One Love’ and the kind of emotional governance and narratives these digital movements bring forward. Through a Deleuzian reading of sensation, a central theme of this work is to investigate the kind of affects solidarity memes charge the atmosphere with and how art can disrupt dominant narratives of the war on terrorism. This work is situated in the wider affective and visual turns in International Relations and is forthcoming in a special issue on emotions in the Journal of International Political Theory. She is keen to collaborate with artists on this project.

More generally, Clara’s research is critical in the sense of thinking change, agency and emancipation from hegemonic structures. Clara is published in Critical Terrorism Studies, International Studies Review and Critical Studies on Security.

Eroukhmanoff, Clara (2017) “A feminist reading of foreign policy under Trump: Mother of All Bombs, Wall, and the locker room banter” Critical Studies on Security, Vol. 5, No. 3, pp.177-181

Eroukhmanoff, Clara (2016) “A critical contribution to the religion-security nexus: going beyond the analytical.” International Studies Review. Vol. 18, No. 2, pp. 366-378

Eroukhmanoff, Clara (2015) “The remote securitisation of Islam in the US post-9/11: euphemisation, metaphors and the “logic of expected consequences” in counter-radicalisation discourse” Critical Studies on Terrorism, Vol. 8, no. 2, pp. 246-265

Clara Eroukhmanoff is co-convenor of the BISA Working Group on ‘emotions in International Relations’ with Naomi Head (Glasgow) and Amanda Beattie (Aston).

Clara is a fellow at the Centre for International Public Policy at Royal Holloway University and a research associate with the University of Cambridge (POLIS) where she worked on a project entitled ‘Media, Faith and Security’ with Roxanne Farmanfarmaian and funded by an ESRC Impact Acceleration Grant. With Roxanne and other research associates, she organised a day workshop at the House of Lords with members of the media, members of parliament and various faith communities, in order to reach an understanding and respect of religious practice and freedom of press in a post-Charlie attacks environment.