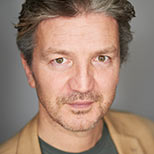 Dr. Alex McSweeney came to university life late after spending 25 years as a professional actor. He is a Senior Lecturer in English and Creative Writing. His Ph.D. Research at King's College, London examined class discourses within the novels of George Gissing. His interests in English Naturalism has informed his work ever since. He is also a writer and director with recent productions at The Pleasance London, The Tabernacle and The Hen and Chickens Theatre and The Rose Theatre, Kingston.

His professional career has seen him perform on the West End Stage, many regional rep. theatres, as well as in varied Film, Television and Radio productions. Among his TV credits are Graham Foster in Eastenders, Dave Radford in The Bill, Captain Wilder in Primeval lll and most recently in 2014, DS Sykes in Hollyoaks. He has taught screen acting and Mountview Academy of Theatre Arts and is a Lecturer in Drama at Kingston University.

Alex continues to act, write and direct alongside his university life. He has spent the last six years, amongst other things, as part of Steven Berkoff's company acting in On the Waterfront at Nottingham Playhouse and the Theatre Royal, Haymarket and Oedipus at the Liverpool Playhouse and Spoleto Festival USA. After a brief run at the Rose Theatre Studio, Kingston, Alex directed his most recent play OUT OF THE CAGE which opened for a four week run at The Park Theatre in 2015.