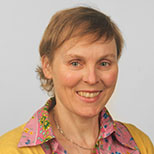 Dawn Ingleson is a senior lecturer and Course Director of both Drama and Applied Theatre & Theatre Production in the School of Arts and Creative Industries. She has previously taught on a range of BA, MA and PGCE courses in theatre, writing, education and children’s literature. She has worked in theatre and education.

Dawn has directed, produced and project-managed extensively in Britain and internationally. As the National Theatre Mobile Tours Producer, she specialised in producing mid-scale UK tours of twentieth century plays, focusing on Brecht with actor-musician companies. She produced the National Theatre’s UK tours of Brecht’s The Threepenny Opera, in an updated version by Anthony Meech with lyrics by Jeremy Sams. She also produced Frank McGuiness’ updated version of The Caucasian Chalk Circle with Filter Theatre.

She has also commissioned and produced work for young audiences from playwrights including Roy Williams, Rebecca Lenkiewicz, Leo Butler, and Tim Crouch, and has produced work for schools in Japan for the Setagaya Public Theatre as well as the UK. She directed, updated and developed a London version of The Stones, originally written and performed by Australia’s Zeal Theatre for a National Theatre schools tour that has been retoured twice.

Her interests lie in mindfulness and theatre, participatory theatre, the relationship between the audience and the performer, performative storytelling for young audiences, and Theatre-In-Education. Before joining LSBU, she worked as Head of Learning at Discover Children’s Story Centre, and also developed and produced a participatory theatre piece to support conflict resolution for KS2 children in south London primary schools.

Dawn is a qualified teacher and has trained teachers and performers in many different capacities throughout her career to date. She has run sessions on using drama and performance to support children’s literacy learning, and before that she was Education Manager for the National Theatre’s production of War Horse. In this role she co-devised and ran student/teacher and actor/puppeteer training sessions in London, New York and Toronto.
She has guest lectured at Goldsmiths College, London in drama, on the MA Writer/Teacher course and on the MA Children’s Literature course.

Before joining LSBU, Dawn created a project around participatory theatre and conflict resolution for primary school children, focusing on immersive and forum theatre with KS2 children attending Saturday School. This work includes conflict resolution theories, Philosophy for Children, and aspects of invisible and forum theatre, as well as using a strong narrative and promenade theatre. It is also investigating young audience choice and abilities, and willingness to make choices in certain given situations. She is also interested in mindful teaching and learning and mindfulness and theatre.