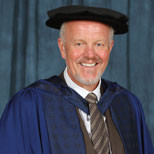 David Powell has played a significant role in shaping the baking industry, a sector that has been close to the heart of LSBU since Borough Polytechnic was founded in 1892. As well as establishing his own highly successful business, he has worked closely throughout his career with the Worshipful Company of Bakers to raise standards and promote high quality education. He is also one of the main supporters behind this year's refurbishment of the National Bakery School.

David Powell graduated from The National Bakery School in 1977 with a Diploma in Baking Science, as the top student in his year. That achievement won him the freedom of the Worshipful Company of Bakers, an honour that paves the way to becoming a freeman of London. It was to prove the start of a long and beneficial connection.

David began his career working in retail bakeries, before joining a Belgian ingredient company. This gave him the opportunity to visit some of the best bakeries in England, Europe and the rest of the world. He then went to work for legendary baker Pierro Scacco as technical director. When Pierro decided to sell the company, David was ready to set up on his own.

A product development specialist, David had the business nous to tap into the coffee shop boom that started in this country in the late 1990s – and still shows no sign of slowing down. Unusually, he secured contracts for several of the big chains, thanks to his willingness to develop bespoke products for each one. David Powell Bakeries also supplied speciality breads and other products to upmarket outlets like Waitrose, Harvey Nichols and Selfridges.

In 2005, David sold the business, which by now had 250 employees, to the American frozen food company Rich Products. He stayed on for the next five years as Global Innovation Director, visiting Rich's sites in Mexico, South Africa and China in the search for inspiration for new products. In 2008, he became Master of the Worshipful Company of Bakers.

Over the years, David has worked hard to strengthen links between the Company and the baking industry and to give the Company a renewed sense of purpose. 'When I joined, only about 30 per cent of the members had links with industry,' he says. 'Now it's about half,' he says. The Company is now launching a new scheme for bakery apprentices, and has introduced the Baker's Marque, a quality initiative designed to recognise the very best in the industry.

David remains closely involved with the Company. He is also actively involved with fundraising for two charities, the London Symphony Orchestra and cricket foundation Chance to Shine. To date, Chance to Shine has introduced more than 2 million underprivileged children to cricket while the LSO has a very strong outreach programme aimed at giving children in state schools the opportunity to play a musical instrument.

Over the past few years, David has been one of the main supporters of the recent refurbishment of the National Bakery School. The school's sophisticated facilities include a new demonstration bakery, and it is now offering a new Masters in Baking Technology. 'The School shaped my career,' he says. 'And there's still an urgent need for the kind of education it provides, with that solid grounding in scientific principles. Of course, bakers need practical skills. But you've got to have that scientific knowledge if you want to keep innovating and moving forward.'

At the recent Baking Industry Awards – the industry's equivalent of the Oscars – David received the prestigious award for Outstanding Contribution to the Baking Industry.