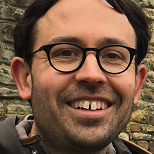 Dan Barnard is a theatre director by training and has directed productions at theatres including Birmingham Rep, the Arcola, Ovalhouse, Southwark Playhouse and BAC. He also worked as Assistant Director on the Olivier Award-winning production Jerusaslem by Jez Butterworth in the West End. He now splits his time between LSBU and working as one of the lead artists of Fast Familiar, a company who create artworks which are playful, participatory and political and which often use digital technology in innovative ways.

Their recent productions The Justice Syndicate and The Evidence Chamber have received critical acclaim from The New York Times, the Irish Times and the Stage. They have collaborated with organisations including the Natural History Museum, the National Trust and the Leverhulme Research Centre for Forensic Science.

At LSBU, Dan leads the Digital Performance Research group. His research centres on interactive theatre and performance and digital technologies. His academic writing has been published in journals including the International Journal of Performance and Digital Media, the Journal of Law and Humanities and Stanislavski Studies. He won Best Short Paper at the International Conference on Interactive Digital Storytelling 2018, for a presentation on Fast Familiar’s Looking for Love. At LSBU he teaches undergraduate modules on multimedia performance, devising and preparing for the professional world. He also undertakes PhD supervision.

Dan teaches undergraduate modules on Multimedia performance and devising performance (drawing on his professional experience). He also leads a module called the Professional Toolkit, which helps students prepare for the practical elements of the professional world, including fundraising, marketing, preparing CVs, pitching your work and audition technique.

Dan’s research and practice focus on the fields of interactive performance and performance and ecology. As part of a Creativeworks London project he is working with the Department of Computing at Goldsmiths to do a study of audience behaviour during fanSHEN’s interactive, actor-less piece Invisible Treasure, which was performed at Ovalhouse theatre in October and November 2015.

Together with Rachel Briscoe and Dr Lisa Woynarski, he coordinates the Performance and Ecology Network, a group of professional theatre makers, architects and academics who meet at the Young Vic Theatre. He has presented at various conferences including Performance, Ecology, Responsibility at Canterbury Christ Church University and Culture, Memory and Extinction at the University of Westminster.

In addition to his work with Fast Familiar, Dan also co-organise an annual Peformance and Digital Technologies Gathering, an event for professional artists and academics to gather together and discuss shared interests and improve the support mechanisms for the sector. He is working in collaboration with Arts Council England, Julies Bicycle, Abandon Normal Devices and Arts Catalyst to advocate for greater environmental awareness in the digital arts sector.