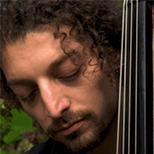 Having previously studied at University College London and at the London College of Communication, Christiano currently works as a sound designer, composer and audio consultant at Studio Zzyzx and as a freelance sound recordist for film, television and radio.

Notable credits include the sound design and music for the original multi-media online and Webby Award winning interactive campaigns for Breaking Bad, Regence / Blue Cross Mini and the X-Factor, as well as location sound for the multiple award-winning My Brother the Devil (Sally El Hosaini, 2012) and numerous well-known commercials. As sound producer, multi-instrumentalist and session bass player, Christiano has collaborated with a wide range of artists.

Christiano Sossi is a Sessional Lecturer teaching soundscape studies and sound design as well as classes in sound for film, and workshops for professional practice in creative sound production.

He has previously taught at the London College of Communication (University of the Arts) and The New York Film Academy.

Christiano is co-producing his first feature film (working title: The Many Things About Her) with the promo partially funded by the Film Council's Screen South.

Work outside LSBU includes a variety of interconnected disciplines, ranging from session work as a bass-player and multi-instrumentalist, and producer of sound design and composition for film, television and radio, via location sound recording.

Christiano works as a sound designer, composer and audio consultant at Studio Zzyzx, London and as a freelance sound recordist for film, television and radio. Christiano has previously collaborated with a wide range of artists. For example, in the realm of live and cross-over music, with Mungo Jerry, George Trantalides, Finley Quaye, Essen, Embed and Wolfman. In the world of dance and electronic music he has worked with artists such as Donna Dee, Tali, The Egg, Craig Campbell, The Hoxton Whores, Coomassie, The London Punks, Ashley Casselle and Barcodes.