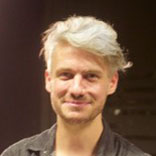 Ben Mallaby is a Senior Lecturer in the School of Arts and Creative Industries. He specialises in filmmaking with an emphasis on the development of scripts, professional development and on post-production. As a freelancer his focus is in comedy filmmaking and he works exclusively in this genre.

He lectured for four years at the University of Gloucestershire before moving to Ravensbourne, also for four years. In both cases he worked on the Digital Film Production courses. He studied his MA in Television Production at Bournemouth University and completed his PGCHE in 2009.