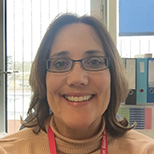 Alison qualified as a children’s nurse in 1999 after completing her training at St Bartholomew School of Nursing and Midwifery. After qualifying Alison worked at a district general hospital in Kent and completed her BSc Honours in Child Health with the Royal College of Nursing via distance learning in 2001.

Alison then worked as a Senior Staff nurse in a Paediatric A&E department in London for several years. She  moved on to work in a district general hospital as a Junior Sister managing the general paediatric wards.

After several years Alison took the post of Ward Manager for the paediatric unit and commenced her Paediatric Nurse Practitioner programme training in 2010, commencing her MSc in Advanced Practice at Canterbury Christchurch University. In 2013 Alison completed her Nurse Practitioner training and exited with a Postgraduate Diploma in Advanced Practice.

Alison commenced at LSBU in 2014 as a Senior Lecturer in Children’s Nursing.

Alison teaches on several pre-registration modules across the year groups:

She is module lead for the CPD module 'Nursing Assessment and Stabilisation of the Acutely Ill Child'.

During her clinical experience Alison provided education for nurses as part of her role.

View my publications at https://openresearch.lsbu.ac.uk/
Alison has been a member of the Royal College of Nursing since 1999.