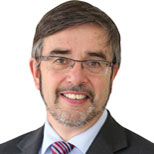 Professor Paul Ivey is Deputy Vice-Chancellor and Group Chief Business Officer accountable for place and impact, third-stream income, and global knowledge exchange. Educated at the Duke of York’s Royal Military School, he began his career as an engineering apprentice and as a certificated sea-going marine engineer. He then studied at the University of Sussex, awarded B.Sc. (Hons.) Engineering and Applied Science, and subsequently Doctor of Philosophy.

After working as an aerospace design engineer in the US, Paul returned to the UK to study aero-engine thermo-fluid-mechanics. He authored over one hundred publications in journals, conferences, and book chapters; initiated/supervised twenty-five Doctoral research projects; and secured two aero-engine anti-icing patents. His work contributed to the design of internal air systems for GE and Rolls-Royce aero-engines, compressor blades for the RR Trent engine family, and smart sensor gas turbine diagnostic systems. For these contributions he was awarded the title Professor of Turbomachinery.

Previously Paul was a Research Fellow at the University of Sussex, Professor at Cranfield University, Head of School at the University of Hertfordshire, Executive Dean at Coventry University and Pro Vice-Chancellor at Birmingham City University. He was also an elected county councillor and twice a Westminster parliamentary candidate. He is now chair of the University of London Military Education committee, honorary fellow of the Jordanian Royal Scientific Society, governor at the Emirates Aviation University in Dubai, trustee of the Majid AlSadi Charity Foundation and named ‘Individual of the Year’ by the Chinese Hanban.