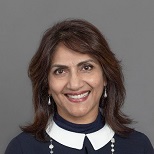 Rashda Rana SC is a commercial and construction/ infrastructure Silk with 30 years’ international experience in the legal profession. She has worked as counsel and arbitrator in a number of international jurisdictions including London, Australia, New York, Paris, Milan, Brazil, Hong Kong, Singapore, Malaysia and China and under a variety of institutional and ad hoc rules. She has also held the role of General Counsel for a major global property development and construction company.

Rashda has also been Adjunct Professor of Law at Sydney University Law School, teaching the undergraduate course in international commercial arbitration which she devised, and which was the first of its kind in Australia.

She is an active member of a number of significant industry associations, including as Past President of ArbitralWomen and the first female President of the Australian Branch of the Chartered Institute of Arbitrators (CIArb). She has chaired the CIArb Examination Board and has been responsible for the development of the new CIArb Pathway Courses in Arbitration (Modules 1, 2 and 3), including drafting all the teaching materials.

Rashda is an experienced CEDR accredited mediator and has conducted a large number of mediations concerning a variety of legal issues.  In 2017, she was appointed to the ICSID Panel of Conciliators by the President of the World Bank Group.

Rashda has regularly been recognised for her work, including: