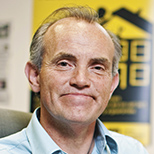 Michael’s professional life has been centred around developing trusted brands. He worked for seven years as Marketing Director of The AA, the organisation famous for its yellow rescue vans, and before that for six years in the same role at Saga, helping to take the company to national prominence. Since 2016 he has worked for the charity Age UK, running its product marketing and creating its commercial brand, Age Co, before becoming Managing Director of its Lottery and Raffle companies.

In the higher education sphere, he has worked as Chief Marketing Officer for BPP, the leading professional education organisation that offers qualification courses to lawyers, accountants, HR professionals and more.

Prior to the The AA and Saga, Michael worked in the City as a fund manager. During this period he spent three years living in Japan, developing some aptitude for the language and a fondness for much of Japanese culture. On his return from the Far East, he did an MBA at INSEAD in France, to add to his MA in History and Economics from Oxford University.